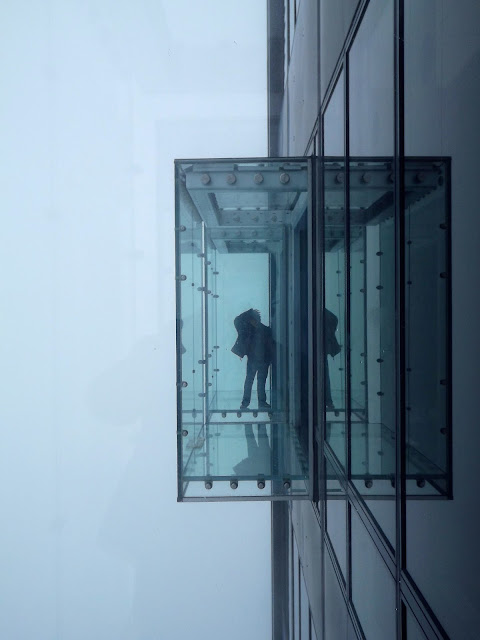 The Willis Tower in Chicago is more popularly known as the Sears Tower. It used to be the largest skyscraper in the world. It is now, arguably, the tallest or second tallest in the US and the 14th tallest in the world. Despite losing it's 25 year throne as the tallest, it is still a tourist trap with an observation deck on the 103rd floor. From over 1300 feet, the view is impressive for some and intimidating for others.

My son falls into the latter category of intimidated by heights. He wants to go up and see things like this, but is afraid to. Phobias are intimidating.

I get him every other weekend. One Saturday we went to downtown Chicago to see the Field Museum to visit a T-Rex named Sue and mummies and other wonders. While we were out we decided to walk about downtown.

We were walking by the Sears Tower and we looked up and could not see the top due to the foggy fall day we were having. We could not see the top...that meant from the top you could not see the bottom. I had an idea and we went inside. There was no line to the Skydeck. No one was going to pay money on a day such as this. I spoke to the people working the counter. No one had been in in over an hour. The Skydeck was empty. With a little sweet talking, we were in the elevator and on our way up.

We stepped off the elevator and the fog was so thick that you could not see much of anything. It was perfect. We were there and the things that normally intimidated him were not visible. He was aware of how high up he was, but the scale was lost due to the foggy visual.

They have these enclosed clear ledges you can step out onto that jut out 4 feet. He was nervous to get out on it, so we went together and he loved looking down at the fog and up at the fog. So did I because I saw the wonder of the fog through his eyes. I went to the neighboring ledge and took my shot.

Later in life I thought of this day. I had recently tried something wonderful and exhilarating and scary to me. It did not work out.  Had I been able to see how high up I was and how far I had to fall, I may have been too intimidated to try at all. I was aware of the height I had soared and was exhilarated and alive by it. More alive than I had ever been. I could not see the dangers and the pain. The fog insulated me and allowed me to step on the ledge.

But I was there.